If you own a small dog, you’ve likely had to endure a joke or two about how a hawk might one day come along and snatch your beloved pet. Unfortunately, hawk attacks are no laughing matter. A quick internet search will reveal dozens of videos and news reports of hawks swooping down on unsuspecting pets.

Every responsible pet owner should know how to protect small dogs from hawks. Understanding the threat could help prevent your furry friend from serious harm.

Can a hawk carry your dog away?

The short answer is yes, but only to a point. While hawks are known to attack small dogs and cats, they can rarely lift them very high off the ground. Birds of prey can dive at great speed, but they cannot lift more than their body weight. Most hawks weigh between one and four pounds.

If your dog weighs more than four pounds, you are in the clear, right? Wrong.

While a hawk may not be able to carry your dog into the wild blue yonder, their talons are incredibly sharp. There are many documented cases of small dogs being severely injured by a raptor’s claws. Since they are designed to tear flesh, injury from a hawk’s talons will likely require medical attention.

Based on reports, some dog breeds seem more likely than others to attract a hawk’s attention. Yorkshire Terriers, Pomeranians, and toy breeds are the most at risk because of their small size. These animals resemble the rodents that hawks usually feast on.

Puppies are also more at risk because of their small size. A puppy should never be allowed to roam outdoors alone if there are hawks nearby. Bad news!

Your dog might weigh more than the average hawk, but the possibility of an attack is genuine. Hawks have excellent eyesight. However, they cannot discern the weight of potential prey. If a hawk tries to snag your dog, it will quickly realize its mistake and release it.

Many reports of hawk attacks are sensational, and investigations have debunked some. However, many legitimate cases have been documented. Hawk attacks are not just an urban legend. The threat may be small, but it is authentic.

Where and when is your pet at risk of a hawk attack?

There are many species of hawk, and their geographic distribution varies. It is best to research your local area to see if any hawk habitats are nearby. Generally, hawk behavior is quite predictable. Carefully observe your surroundings to ascertain the level of risk. Common risk factors include:

It is important to remember that hawks are wild animals. Their behavior is usually predictable, but many factors can affect how and when a hawk hunts. There is no substitute for staying aware of your surroundings.

Which species of raptors are known to attack pets?

Not all hawks are large enough or fierce enough to attempt an attack on a dog or cat. Some are peaceful creatures that rarely feast on small mammals. Based on the available reports, the following species are the most likely perpetrators:

This raptor is known for its ability to adapt to almost any climate and locale. For this reason, it can be found all over the continental United States and much of Canada. If you’ve ever seen a hawk flying in wide circles in the sky, it is probably a red-tail.

As their name implies, these hawks are typically found in the northern United States, Alaska, and Canada. They make their nests in dense forests and at the edges of fields, usually nearby a river. Aggressive by nature, they will protect their territory at all costs.

That’s right. Owls are also known to attack pets. Great horned owls are responsible for the majority of reported raptor attacks. These birds are undeterred by the presence of humans and can make their homes in dense urban areas. They possess excellent camouflage and typically hunt at night.

Other raptors known to attack dogs include the cooper’s hawk, the great gray owl, the barred owl, and the sharp-shinned hawk. If any of these birds have been spotted in your area, there is a chance that your pet could be attacked.

What to do if your pet is attacked.

Fortunately, hawks and other raptors fear humans. If you are close by, hawks will generally stay away. However, if food is scarce, birds of prey become desperate and take more risks to obtain a meal.

Hawks move very quickly when they dive for prey, sometimes more than 120 mph! Chances are, you won’t be able to react in time to intercept a hawk attack in progress. Importantly, all hawks are federally-protected in the United States. Causing harm to a protected hawk can carry a harsh penalty.

Protecting your dog is not a legal excuse for harming a hawk. It is important to remember that the hawk is only trying to get a meal or defend its territory. Hawks are very afraid of humans and will usually avoid areas where humans congregate.

If you do see a diving hawk, run towards the area and make as much noise as possible. Waving your arms above your head can also frighten a hawk away. Should a hawk grab hold of your dog, it will likely drop it quickly. Severe injury and even death can still occur in this extremely unlikely scenario.

Birds of prey can injure even large dogs. There are cases of hawks targeting pets as heavy as 60 lbs. The best way to address this threat is through prevention. Fortunately, there are several things that you can do to protect your furry friend from this genuine threat.

How To Protect Small Dogs From Hawks

Hawk attacks are rare, and deadly hawk attacks happen even less often. There are several simple steps that you can take to protect your beloved pet.

The Best Talon-Proof Harness to Protect a Dog From Hawks 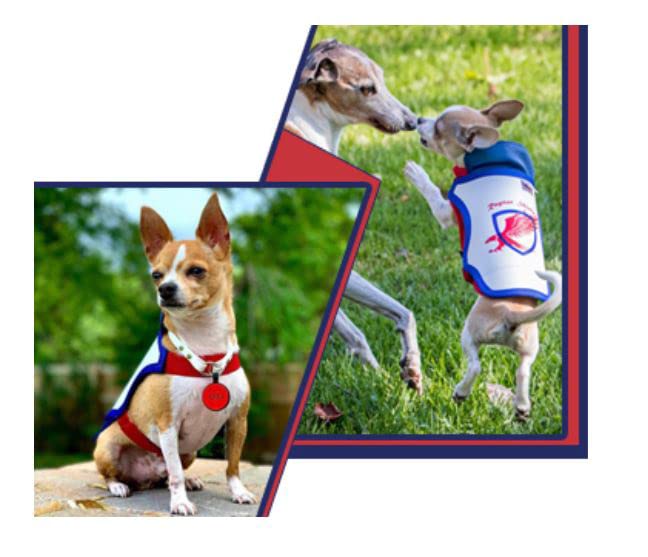 There are other simple precautions that you can take to minimize the risk to your pet. Avoid feeding your pet outdoors. Leftover dogfood can attract rodents like mice and rats. These small mammals are the hawk’s favorite meal. If a hawk notices lots of rodents in the area, they will return often.

Raptors also like to feast on small, ground-feeding birds like doves, grouse, quail, and even roadrunners. Avoid feeding these birds near your home, as they will also attract hawks and owls’ attention.

There are no guarantees that these steps will prevent all hawk attacks, but following them will significantly reduce the risks. These necessary measures are just another part of responsible dog ownership. It is better to know the facts than to live in fear.

What to do after a hawk attack

The chance that a hawk or another raptor will attack your dog is relatively low, but it does happen. Even if your dog seems fine after the incident, it is best to seek medical attention. The most common raptor related injuries are minor scrapes, but more serious ones are possible.

Hawks seize their prey with sharp talons that are built for piercing and tearing. Puncture wounds can cause severe damage to a small dog. All pet owners know that dogs sometimes hide their pain. Even if your dog is acting normally, a severe injury can be present.

If the hawk drops your dog, a concussion or lung contusion can occur. These injuries are particularly insidious since there may be no visible sign. It is always best to seek the advice of your veterinarian in the aftermath of a hawk attack.

Other threats from wild animals

Many of the precautions you take to prevent hawk attacks will also decrease your pet’s chances of being injured or killed by other animals. Remaining vigilant and taking common-sense safeguards can also deter coyotes, foxes, bears, and other dogs.

Depending on where you live, the threat of a fox or coyote attack may be even more likely than a hawk attack.  Similar to raptors, these other creatures tend to avoid humans at all costs. Supervising your dog whenever they are outdoors is the simplest and cheapest way to protect them.

Your dog relies on you for protection from harm. Although the chance of a hawk attack is relatively small, there are simple precautions that you can take to diminish the risk further.

The easiest thing you can do is keep an eye on your dog whenever they are outdoors. After all, your dog probably wants you close by anyway!

Pay attention. Be sure to learn about the wildlife in your area to get a better understanding of the risks. Follow some basic precautions, and you and your pet will continue to enjoy outdoor adventures for years to come.